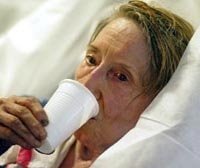 Dehydration is a deficit of total body water, with an accompanying disruption of metabolic processes. Dehydration takes place when body loses more fluid than person drink. When too much water is lost from the body, the organs, cells, and tissues fail to function as they should, which can lead to dangerous complications. Dehydration can cause hypernatremia (high levels of sodium ions in the blood) and is distinct from hypovolemia (loss of blood volume, particularly plasma).

Causes:
Dehydration occurs when water intake is not enough to replace free water lost due to normal physiologic processes, including breathing, urination, and perspiration, or other causes, including diarrhea and vomiting. It also, occurs when free water loss exceeds free water intake, usually due to exercise, disease, or high environmental temperature. Mild dehydration can also be caused by immersion diuresis, which may increase risk of decompression sickness in divers.
Sweating: is part of your body’s natural cooling process. When you become hot, your sweat glands activate to release moisture from your body in an attempt to cool it off. Sweating also hydrates your skin and maintains the balance of electrolytes in your body.
Illness: Illnesses that cause continuous vomiting or diarrhea can result in dehydration. Important electrolytes are also lost through these processes.
Fever: In fever, your body loses fluid through your skin’s surface in an attempt to lower your temperature.
Urination: Urination is the body’s normal way to release toxins from your body. If you don’t replace the fluid lost through excessive urination, you run the risk of developing
Symptoms of Dehydration:
Most people can tolerate a three to four percent decrease in total body water without difficulty or adverse health effects. A five to eight percent decrease can cause fatigue and dizziness. Loss of over ten percent of total body water can cause physical and mental deterioration, accompanied by severe thirst. Death occurs at a loss of between fifteen and twenty-five percent of the body water. Mild dehydration is characterized by thirst and general discomfort and is usually resolved with oral rehydration.
Dehydration can be life-threatening when severe and lead to seizures or respiratory arrest, and also carries the risk of osmotic cerebral edema if rehydration is overly rapid Symptoms of mild to moderate dehydration include:

Severe dehydration is likely to cause the following: